Take 20% off the Executive-Ready Slide Decks course with the code: TAKE20 – Limited time only! Check it out ⮕

How to build presentations like top strategy consulting firms

How to get into consulting and succeed as a consultant

Master charting with the most powerful PowerPoint add-on

Set Two Chart Axes to the Same Scale in Think-Cell

It’s quite common to have two charts on a slide and to compare the values between the two charts. However, if those values are significantly different, think-cell will set a different scale for each chat.

This makes it difficult to compare across the charts, as you can’t simply use a visual comparison of the height of the column. Instead, you need to do mental math. In fact, some readers might not even realise the scales are different and incorrectly interpret the data.

Important
Don’t have the Think-Cell PowerPoint add-on? Read our review to learn more or get a free trial from Think-Cell.com and test it out!
Free Download: Consulting Presentations

To avoid this, you can set two think-cell charts to the same scale. Even when the chart data changes, the axes will remain locked. This makes it much easier to compare data between two charts.

Step 1. Select the two axes that you want to set to the same scale

Step 2. Right-click on one of the axes and select ‘Set to Same Scale’

While both axes are highlighted in blue, right-click on one of the axes. This will bring up a circular menu. In that menu, click on the button that says ‘Set Same Scale’.

Step 3. The two axes will be locked to the same scale

To remove the same scale lock, simply right-click on either of the axes and on the button that says ‘Reset to Independent Scale’.

Your personal database of slide templates to use in any project 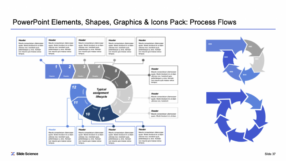 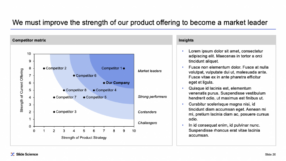 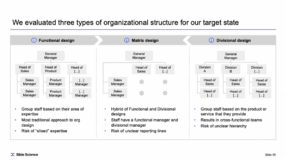